Vertical farming is cultivating plant or animal life within a skyscraper greenhouse or on vertically inclined surfaces. The modern idea of vertical farming uses techniques similar to glass houses, where natural sunlight can be augmented with artificial lighting.

“Vertical farming” was coined by Gilbert Ellis Bailey in 1915 in his book Vertical Farming. This was not the current meaning—he wrote about farming underground with the use of explosives. Modern usage refers to skyscrapers using some degree of natural light. 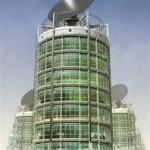 Mixed-use skyscrapers were proposed and built by architect Ken Yeang. Yeang proposes that instead of hermetically sealed mass-produced agriculture that plant life should be cultivated within open air, mixed-use skyscrapers for climate control and consumption (i.e. a personal or communal planting space as per the needs of the individual). This version of vertical farming is based upon personal or community use rather than the wholesale production and distribution plant and animal life that aspires to feed an entire city. It thus requires less of an initial investment than Despommier’s “The Vertical Farm”. However, neither Despommier nor Yeang are the conceptual “originators”, nor is Yeang the inventor of vertical farming in skyscrapers.
Despommier’s skyscrapers
Ecologist Dickson Despommier argues that vertical farming is legitimate for environmental reasons. He claims that the cultivation of plant and animal life within skyscrapers will produce less embedded energy and toxicity than plant and animal life produced on natural landscapes. He moreover claims that natural landscapes are too toxic for natural, agricultural production, despite the ecological and environmental costs of extracting materials to build skyscrapers for the simple purpose of agricultural production. 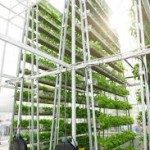 Vertical farming according to Despommier thus discounts the value of natural landscape in exchange for the idea of “skyscraper as spaceship”. Plant and animal life are mass-produced within hermetically sealed, artificial environments that have little to do with the outside world. In this sense, they could be built anywhere regardless of the context. This is unlikely to be advantageous with regards to energy consumption as the internal environment must be maintained to sustain life within the skyscraper. However, this is not necessarily the case, as one of the most important features of a vertical farm is that it would contain some form of renewable energy technology, be it solar panels, wind turbines, or a water capture system, and could contain all three. The vertical farm is designed to be sustainable, and to enable nearby inhabitants to work at the farm.

Despommier’s concept of “The Vertical Farm” emerged in 1999 at Columbia University. It promotes the mass cultivation of plant and animal life for commercial purposes in skyscrapers.