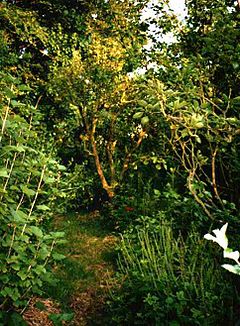 Forest gardens are probably the world’s oldest form of land use and most resilient agroecosystem. They originated in prehistoric times along jungle-clad river banks and in the wet foothills of monsoon regions. In the gradual process of families improving their immediate environment, useful tree and vine species were identified, protected and improved whilst undesirable species were eliminated. Eventually superior foreign species were selected and incorporated into the gardens. Forest gardening is the practice of companion planting; intermixing plants to grow in a succession of layers, to build a woodland habitat.

Forest gardens are still common in the tropics and known by various names such as: home gardens in Kerala in South India, Nepal, Zambia, Zimbabwe and Tanzania; Kandyan forest gardens in Sri Lanka; huertos familiares, the “family orchards” of Mexico; and pekarangan, the gardens of “complete design”, in Java. These are also called agroforests and, where the wood components are short-statured, the term shrub garden is employed. Forest gardens have been shown to be a significant source of income and food security for local populations.

Robert Hart adapted forest gardening for the United Kingdom’s temperate climate during the 1980s. His theories were later developed by Martin Crawford from the Agroforestry Research Trust and various permaculture lists such as Graham Bell, Patrick Whitefield, Dave Jacke and Geoff Lawton.

An example of forest gardening is the design and establishment of a food forest. To understand how this might be useful, one can take note that a regular forest is actually how nature prefers to exist on land, and what it is constantly trying to create. If you leave a clear-cut land alone, and the land is still healthy, eventually it will return to a forest, automatically. If you leave that forest alone, it will eventually turn into an old growth and diverse forest ecosystem, again, automatically, requiring no human input of any kind.

A food forest is a specially designed biological system containing up to seven layers of plant species, from root vegetation, ground cover, herbaceous shrubs, small bushes, fruit trees, large nut or other canopy trees, and climbing vines. Each species is selected for its overall human production while integrating the concepts of companion planting, mulching, and other basic methods of gardening, thereby creating a self-sustaining and mutually beneficial system of plants. Once a food forest has been established, it requires no pesticides, no fertilizers, no crop dusting, no plowing or tilling, and no other maintenance of any kind, leaving the actual harvesting as the only real human activity that is actually necessary.

Food forests have been shown to produce up to twenty-five times more food yield per acre than a traditional farm. This is simply because of the vast difference in philosophy. Twentieth century farming practices have been mainly focusing on mono-culture production systems, such as a field of corn. While this makes it possible to run large machinery and conduct many tasks mechanically because they are only dealing with a single plant, the overall health of the land is continually reduced because a large patch of any one particular type of plant will inevitability draw one set of chemicals out of the ground while saturating the ground with another set of chemicals. Once the land becomes fallow, another crop can be used to correct the issue, and this again is due to the second crop returning the needed chemicals that the first plant needed to grow, and meanwhile drawing out the saturated chemical refuse from the first plant as well. With even a very simple food forest system, the crops of food producing plants are chosen to complement and maintain each other, therefore eliminating the need for crop rotations or soil replenishment through fertilization or other methods, and will go on to produce clean organic food sustainability, in an effectively permanent forest system.